Most of the men and women of the London Ambulance Column were drawn from Voluntary Aid Detachments (VADs). But where did these VADs come from? To answer that, we need to go back to 1907 when an Act was passed that established the Territorial Force, later re-named the Territorial Army. It was to be organised on a county basis with the Lord Lieutenant of the county as the President of the County Association. The members of the Yeomanry and Volunteer Forces were transferred to the new force and the Militia was disbanded. The purpose of the new Territorial Force was to defend the country when the regular Army was deployed abroad.

Two years later, in August 1909 the War Office proposed a Scheme for the Organization of Voluntary Aid. From the start it was envisaged that it would be based on a county system because it is the one upon which the Territorial Force was organised and which the British Red Cross Society had adopted.

The following is a quote from the preamble of the published scheme. 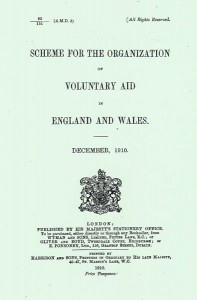 “The following scheme has been formulated with the object of showing how voluntary aid may be organised to supplement the territorial medical service in the event of war in the home territory. It has been arranged on lines similar to those followed in certain foreign countries where organizations for the relief of sick and wounded in war have reached a high standard of efficiency. The number of voluntary aid societies which already exist in our midst is evidence that the necessity for such an organization is fully recognized by the inhabitants of the United Kingdom. However, as these societies have no connection with one another they are liable to act independently, with the result their various spheres of action frequently overlap in some directions, whilst in others they do not extend far enough, thus causing a serious loss of efficiency. Voluntary aid should therefore be co-ordinated.”

The scheme then goes into great detail regarding Ambulance Trains, Casualty Clearing Stations and Hospitals but what is pertinent to this article is the arrangements for the formation of Voluntary Aid Detachments. These were usually referred to as VADs. The term ‘VAD’ also became synonymous with individual members of the detachments

Paragraph 7 of the scheme states that the units will be composed of either men or women. The men’s unit will consist of a Commandant, a Quartermaster and 48 men. The women’s unit will be a Commandant, a Quartermaster and 20 women of whom 4 should be qualified cooks. In addition the women’s unit should have a nurse designated as the Lady Superintendent and who has completed 3 years’ service in a hospital that had a school of nursing attached and has the necessary certificates. All men and women must have first aid certificates or obtain one within a year of joining. As well as medical training, the men were to be thoroughly trained as stretcher bearers as well as preparing means of transport by road and rail. The British Red Cross Society and later, St Johns Ambulance was empowered to form and train the Voluntary Aid Detachments.

In England and Wales, the number of Voluntary Aid Detachments (VADs) and personnel raised and trained by August 1914 is shown in the table below1.

It was initially from the City of London VADs and later the County of London VAD units that the majority of the personnel of the London Ambulance Column were drawn.

1. Source of these figures: Volunteering During the First World War (British Red Cross)